You’re especially lucky today, Beards of Denver loyalists, because we’re bringing you a beard that will make you breathe easier–literally and figuratively. We met Mark while we were awaiting entry into the Great American Beer Festival in October, and we couldn’t have been more pleased to make his acquaintance. Mark started this version of his great beard journey in October of 2012 when he lost his job, but he’s had a beard the better part of the past 12 years (as you can expect, Mark is quite the wise man). Mark, who now works at the Pima Medical Institute teaching in the Respiratory Therapy department, has been growing his beard ever since he started his gig there last year, and his boss is one of his biggest supporters. His wife and daughter, however, are not exactly fans of his beard, which, of course, we find astonishing. Mark says that doesn’t deter his dedication to his beard growth, it just means a little less lovin’ from his sweetheart. If you look closely, you can see Mark braided the pretzels into his beard for GABF, which is his own handiwork;  his wife wouldn’t help him as a form of protest. Even with her dislike of his manly mane, their marriage is going on 14 years strong!  We hope his beard has at least a little to do with that great success.  Mark, who lives in Highlands Ranch, says he gets lots of comments on his beard, especially from other bearded brothers “It’s like a beard fraternity,” he told us. One we’d proudly pledge, Mark! We hope all those pretzels came in handy at GABF.

Beards of Denver fans, Meet Dan and his sweetheart Christy, and feast your eyes on Dan’s fantastic, artistic ‘stache! Christy created this ‘stache masterpiece from Dan’s formerly full beard; apparently, Dan felt he needed a fun change and Christy was able to play Picasso—and—viola!—the masterpiece emerged! The Handlebeard was a smash hit at Dan’s work Christmas party with his co-workers AND his boss, but proved a bit high maintenance. After about a week of gaining adoration from strangers (in restaurants and public transit) and family alike, Dan, a Missouri native, who has been in Denver about seven years, decided to shave it off and bring the full beard back to its glory. Christy, originally from Illinois, has called Denver home for just over two years. She said she had never known too many guys with beards until landing in the Mile High City. Her favorite part is the fuzziness—the middle-to-end stage when the beard softens up, and she thinks most women would agree with her on that (I know we do!) One thing Christy does caution about is the “stubble burn” that bearded men might leave on their significant others’ cheeks when they start to grow their beards back out; early on, the glorious beard may feel like sandpaper, and when kissing their sweetheart and then rubbing their cheek, the beard, in its infancy, can leave a mark. We say it’s all worth it though for such handsome specimen! Thanks guys—we can’t wait to see what creation is next!

No matter what part of town we’re in, we seem to be lucky enough to encounter some amazing bearded men, and last Saturday on South Broadway was no exception to that rule. Zach is a Colorado native we met while he was ordering a pint at the Irish Rover. Zach keeps his beard most of the year and claims it holds lots of secrets–we can only imagine. Zach and his beard live in Capitol Hill and when not out in SoBo he can be found helping people out with their insurance claims at the DMV when they jack up their cars; a noble trade indeed. Zach assured us his lady friend loves his beard–or else she’s a talented liar–and that his dad is jealous of his beard skills; he hopes to grow his own beard out once he retires. We’re glad Zach’s father has his eyes on the prize. And did we mention that cardigan? Yeah, probably didn’t have to, but it sure adds to the whole lot of awesome here. Thanks Zach! 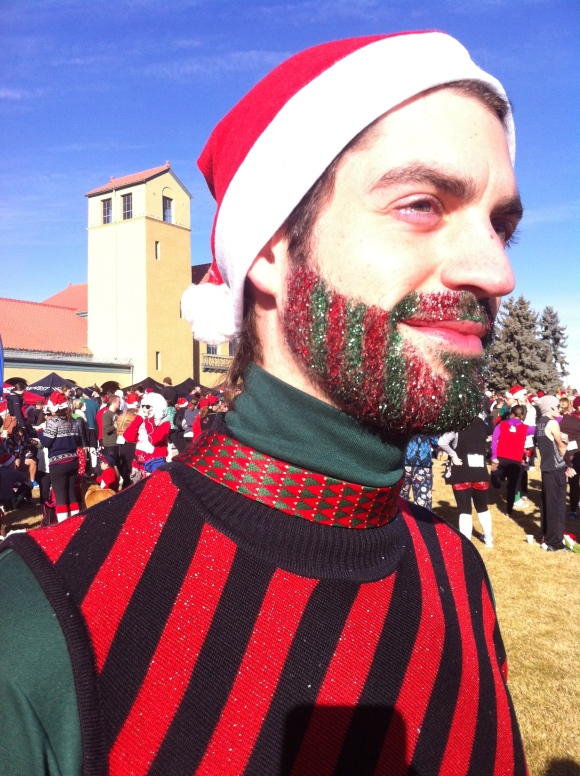 Nick and his glitter-tastic beard impressed us today at the Ugly Sweater 5K fun run in City Park. Nick, who is originally from Idaho, has been known to glitterize and otherwise accessorize his beard for multiple occasions, and he didn’t disappoint today; among the many bearded dudes (and ugly sweaters) in the park, he stood out above the rest. He’s had his beard for the better part of the past four years, and we sure hope he continues to glitterize it for years to come!

Tagged Accessorized Beards, Beards and Runnin', Beards in the Park