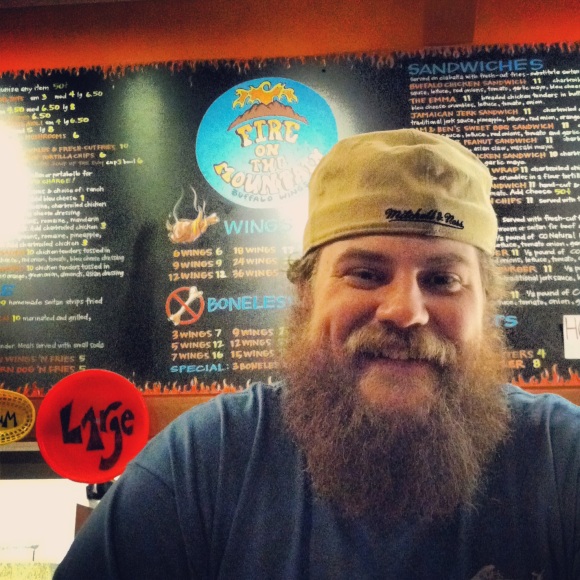 We met Jeter and his fantastic beard based on a hot tip from one of our other local bearded gems that we must check out the bearded gents at Fire on the Mountain restaurant in Highlands, and boy were we glad that we did. Jeter hails from Mississippi, but has called Colorado home for the past two years and landed in Denver in September 2012. He and his sweetheart Jessica had been visiting friends in Vail and Avon for years and finally decided to make the wise choice and move to Colorado . When we encountered Jeter last week, Jessica had just trimmed his beard because it literally was becoming a fire hazard; he had burned it the day before! Jessica noted she loves Jeter’s beard, despite the fact he often gets beer in it and that she occasionally finds that he’s left her comb in the shower because he’s been grooming his glorious beard with it. She doesn’t mind though; that’s what we call true beard love! (And we must mention, the wings at Fire on the Mountain are fantastic–and yes, fiery–as well!)

The Bold and the Beard-iful

We couldn’t NOT approach Cory at the Bacon and Beer Fest on Sunday and inquire about his bold and brash beard. A Colorado native, he and his beard have resided in Denver for the past two years, and he’s been growing his beard about five years. He rocks his beard mainly because his wife loves it (obviously, a woman with great taste!) and he used to like “bad facial hair” and thought it was funny to groom his facial hair in a variety of ways, until he realized the beard suited him best. Cory works as a social worker in the Denver area, helping connect the community to a variety of resources, and we’re sure his awesome beard is a great asset to that cause. Awesome to meet you and admire your beard, Cory! 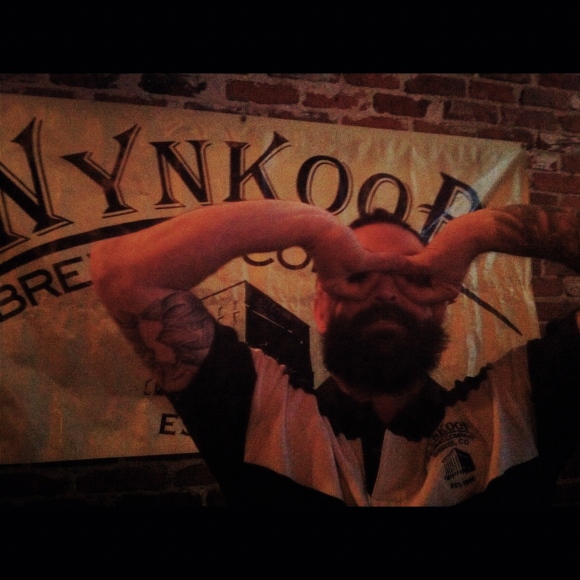 We had the pleasure of meeting Dan and admiring his awesome beard while sampling the Wynkoop’s Rocky Mountain Oyster Stout beer at the Bacon and Beer Fest at Mile High Station Sunday (trust us–the beer was extremely tasty and the beard extraordinarily rad). When Dan isn’t hocking Wynkoop beers at the Bacon and Beer fest, he’s busy with sales for Wynkoop around the Denver area. He’s been growing his beard since October 1st and plans to grow it until April 1st, and we’ll be sure to have a progress report for you at that time–we can’t wait to see the final results! (Though we hope he doesn’t decide to shave it all off at that time). 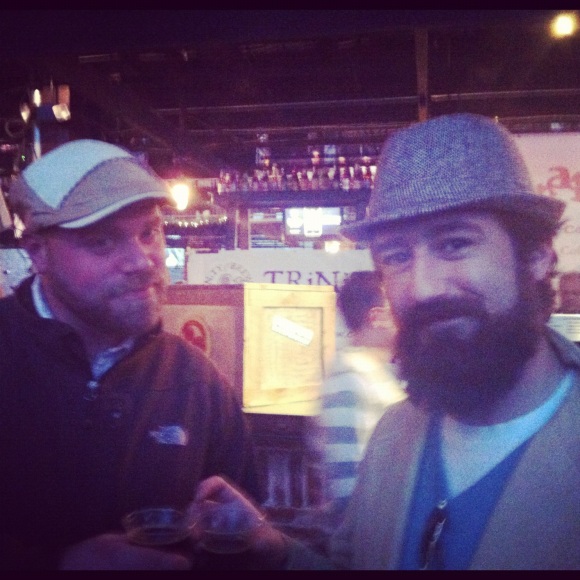 We were lucky enough to happen upon @Moush_Tastic (left) and Gino (right) at the Denver Bacon and Beer Festival on Sunday. @Moush_Tastic has been in Denver about two years and enjoys changing up his facial hairstyles between the stand alone ‘stache and his beard, and Gino’s a Denver native who’s been growing his beard about two-and-a-half months and will keep it until January, when a trip to Mexico may call for shaving it (we hope he reconsiders, though!) These buddies were thoroughly enjoying the bacon and the beer and their beards added to the fabulousness of the event. Cheers dudes! 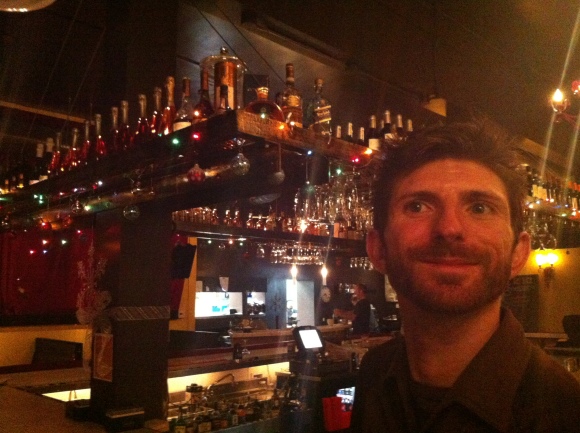 We had the pleasure of becoming acquainted with Ben at the Crimson Canary restaurant this week. A Denver native, he’s been working at the Crimson Canary for about six months, but experimenting with his facial hairstyles a lot longer than that. He described his beard as a sort of 2 a.m. shadow currently, and that his beard adds that oh-so-important structure to his great jaw line. Initially he said it was laziness that lead him to start growing his beard, but for whatever the reason, we are in favor of his decision. Thanks for being a great sport Ben!

It’s well known that all the Pretty People frequent Whole Foods in Cherry Creek, so it was no surprise to encounter Brett (left) and Devin (right) and their awesome facial hair there this week. Brett, born and raised in Loveland, Colorado, has bared his beard, on and off, for the past decade. Devin is originally from Virginia, but he and his impressive sideburns now call Colorado home. You too can experience their bearded prowess at Whole Foods, where they teach a monthly class on cheese and pairings. All we can say is sign us up!

We had the pleasure of running into Travis and his great ginger-beard outside of Crooked Stave Artisan Beer Project in Denver, where he was manning the delicious food stand for The Soup Gurus. Travis, though a native of Indianapolis, has lived in the Denver area for seven years, and is always surprised when people ask him if he dyes his handsome beard-mane. If you met him, you might wonder, too; it’s that good-looking. For all you urbanites, you can catch Travis and The Soup Gurus soon during lunch hours downtown near 17th and Tremont; until then keep a look out at Crooked Stave for Travis, his beard, and his and his friends’ amazing soups!