Give Thanks for This Beard 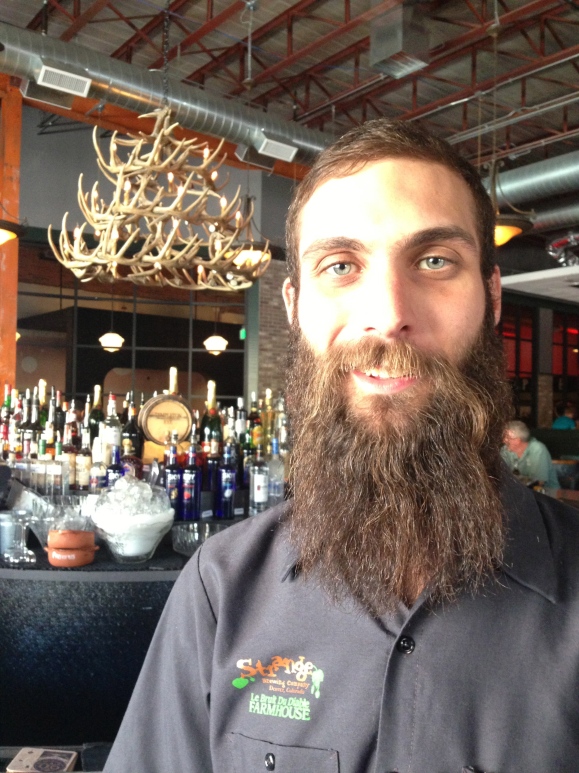 Here at Beards of Denver, we are thankful for ALL the beards we encounter, but we are especially grateful for meeting Charlie during the Underground Music Showcase at the end of July. Charlie and his bad-ass beard were preparing to perform at UMS with the band Thanks to Philo, a blues-rock-reggae crew Charlie’s been the drummer in for three years. Charlie, who lives in Parker, says people love his beard and he gets a lot of attention for it (why are we not surprised he has other beard-groupies?) The only reason he has shaved in recent memory is for a charity event for the Children’s Miracle Network; obviously, his is one philanthropic mane, folks. The lesson here is ONLY shave if it’s ABSOLUTELY necessary for the children. Charlie’s family has polarizing opinions on his beard: his mom and his sweetheart love it while his dad isn’t a fan (likely because he only has a ‘stache himself). We’re with Charlie’s ladies on this one; a man with this stylin’ of a beard is apt to keep smart women around! Keep up the good growth, Charlie! 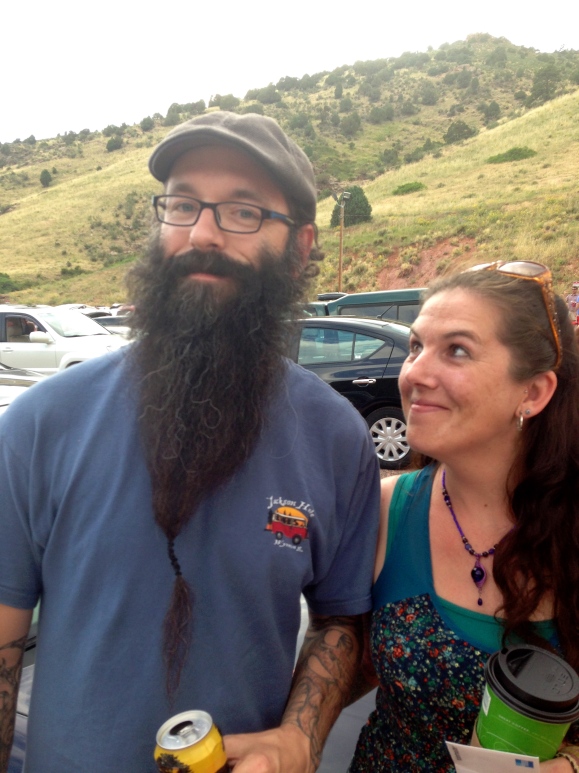 As fans of Beards of Denver may not be surprised to learn, Red Rocks is a mecca for spotting epic beards. But when we saw Sean Walrad tailgating before the Avett Brothers show recently, we knew we’d discovered a bearded diamond in the rough. Sean, who lives in Colorado Springs and is a tattoo artist at Nostalgia Tattoo Co. there, not only can obviously grow an impressive beard, he has used his stunning handsomeness to his advantage, trying out to be a beard model in Bend, Oregon after he had heard about European Beard Model competitions (that sounds like a trip we need to take!) Sean, who’s a huge Colorado Avalanche fan, told us he and many others specifically will grow out their beards when the Stanley Cup starts, which seems like as good a reason as any for showing off that rad facial hair. When we asked Sean’s lovely sweetheart Mandy if she was a fan of his beard, she noted she couldn’t imagine him without it, since he’s had it the entire three years of their courtship. She did say though that sometimes she grabs his beard at night instead of a blanket, which really seems like a better thing to nuzzle up in anyway! Also, apparently Sean and Mandy’s cats aren’t afraid to curl right up in all that bearded-fierce-fantasticness, either! Those cats RECOGNIZE. Thanks Sean! We now know where we can get an awesome tatt AND gaze at an amazing beard.

The ladies of Beards of Denver were lucky enough to meet the delightful and charismatic Levi Wells last month at the Ogden Theatre before the They Might Be Giants show. And, where there might be giants, there will definitely be Great Beards. Levi, who is originally from Cody, Wyoming, told us his beard is a result largely of laziness and a hatred of shaving, combined with the fact he previously was a documentary filmmaker for the Semester at Sea program, and shooting footage whilst at sea doesn’t bode well for doing a lot of shaving, obviously. He told us he was also working on a documentary currently that was going to require him to sail in the Caribbean for two months, so we can only imagine the lengths his beard may reach! A talented photographer as well, you can check out more of his work here. Keep up the great growin’, Levi!

Occasionally, the Ladies of Beards of Denver go on a hunting expedition with a bit too much whiskey and sass (well, let’s be honest, the sass is always present). On those said occasions, we may not take the best notes…which is why this amazing beard is so mysterious, because from our (less than) detailed iPhone notes, we are not sure if he is Jesse or Seamus, but really, what does it matter because LOOK AT HIS BEARD!!! (yes, Jesse/Seamus’ beard warrants three exclamation points). We met him at the third night of Lucero performances at the Bluebird back in April, and he lives in the City Park ‘hood and has resided in Denver the past six years, before that hailing from Albany, New York. Jesse/Seamus said he’s a retired bartender and loves to hang out. With his amazing beard we imagine he has tons of takers!  Thanks darlin’!

Oh boy, this was a fun one. Let’s go back and relive those Telluride times. B of D met Garrett on the way into the festival when we stopped into the refreshing Telluride Bottleworks for some much needed supplies. We found more than we expected: a fantastic beard and the chance to Ice it. A bond was formed and a new Telluride tradition was created. We Iced him every day….perhaps we just iced ourselves. We’ll never know. Garrett moved down to Telluride almost a year ago from Seattle. He’s been growing his current beard for just about a month (keep it up, buddy!) but has already found one of the amazing bearded perks—twirling the ‘ol mustache tips. Free time is solved! He said his mother is “okay with the beard, as long as I go somewhere in my life”. Garrett, my friend. The beard will take you where you need to go—-onward and upward. He’s looking forward to another beautiful southern Colorado winter when he can pick the icicles out of his beard after skiing. Icicles? Iced? It was meant to be.

Until you’ve ridden the gondola with this beard, you haven’t lived. Meet Trevor! Hopefully we can help convince Trevor that his future move from Steamboat to Denver is a wise decision. (Do bearded men ever make wrong decisions? Didn’t think so.) Trevor, here’s just a small example of the bearded love you will soon be receiving on the regular. We support you. We support your patience and dedication to the bearded cause. Move where the beer flows like wine and the beards are celebrated with local pride! Trevor’s face hasn’t been naked for 8 months, when he sadly shaved for an unsuccessful job interview (hint: next time, keep the beard. It sends your future employer this message: “I can handle anything”). Trevor is a mapper, we weren’t surprised. Follow a bearded man into the forest, you will never be lost. His favorite part about his beard is that it has two vortexes. He warned us not to get too close because “you’ll fall in”. Don’t mind if we do, Trevor!

To Hell You Ride! 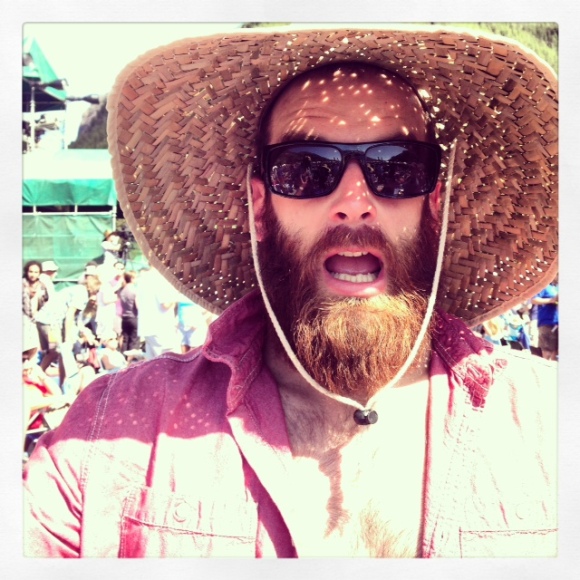 The B of D went on a spiritual journey last weekend and traveled to Telluride (aka beard mecca) for the 40th anniversary of the Telluride Bluegrass Festival. Oh boy, get ready for some fun festival beards! We kick off our T-town special with a return visit from one of B of D’s favorite beards. Remember Coleman? Manly name, manly beard? We were lucky enough to bluegrass jam with Coleman and his bearded crew for much of the weekend. Coleman is known for having one of the best beards in Denver, having possibly the most fabulous sweetheart in Denver (she’s a big supporter of the bearded cause) and he loves to protect the beautiful Rockies by occasionally putting out a wild fire or two. Thanks for saying ‘no’ to the razor, Coleman. No one works that bearded magic quite like you do! 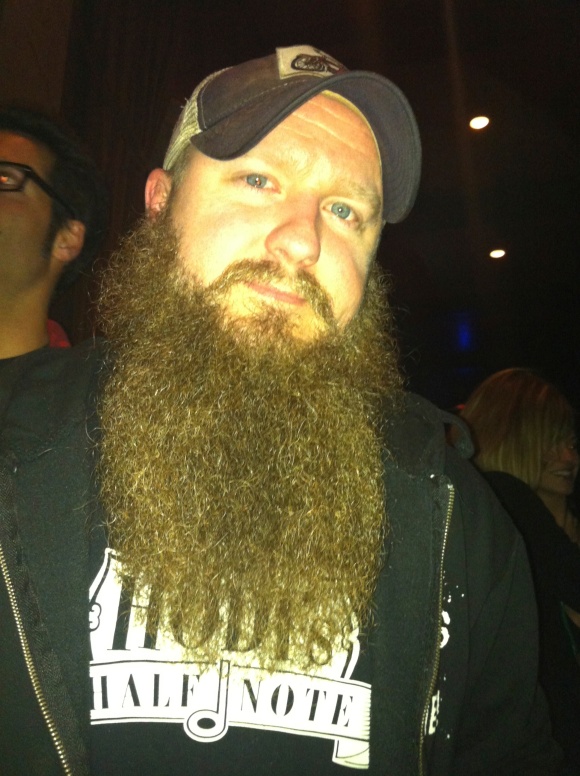 When you go to see a kick-ass alt-country band like Lucero, the odds are stacked pretty heavily in your favor that you’re going to encounter some kick-ass bearded men. But our Beards of Denver hopes were significantly exceeded when we happened upon Jeremy and his amazing beard at the Bluebird in Denver a few months ago. Jeremy, who, when he’s not growing his amazing beard, is the GM at the venue Hodi’s Half Note in Fort Collins, said he’s had his beard something like six to seven years (certainly nothing to sneeze at). His delightful wife, Brandi, loves his beard but Jeremy himself has a love/hate relationship with it because, as he described it best “It’s like a pregnant belly”; everyone wants to touch a bit of that beard! I know we were impressed! Keep up the great growth, Jeremy! 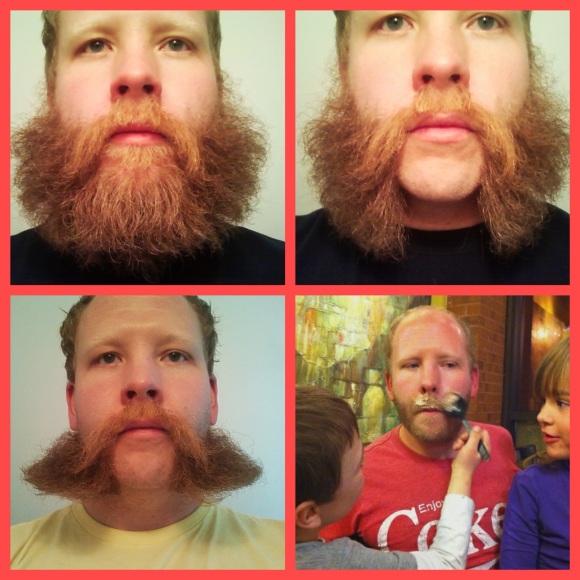 Every once in a while it is the joy of the Beard Huntress to happen upon a handsome bearded man who is willing to share the various stages of change his beard goes through. Such was the case when we were fortunate enough to run into Mr. Johnny Moses a few months ago. Johnny is one of our favorite Denver beards–a native–and was kind enough to share with us the evolution of his beard, which happened over the span of four or five months this year. Johnny works both at the Elm bar and restaurant on East Colfax and Elm in Denver, as well as at Park Hill Methodist preschool, and is shown in the bottom right being given the infamous Ice Cream ‘Stache by some of his students. When Johnny’s not molding the minds of our great city’s youth, or rubbing elbows with the locals at the Elm, he plays in the Denver band I Sank Molly Brown. I said it before and I’ll say it again, Holy Moses, Johnny! We love your beard.