The Thrill of the Chase Beard

As fans of Beards of Denver have likely come to know, the Ladies of Beards of Denver are very dedicated to the documentation and appreciation of The Beard. This story may not surprise most of you, then, as The Pursuit of Donald (as we’ll call it) involved chasing him down Broadway (a rather busy Denver thoroughfare) into Sputnik (one of our preferred watering holes) to get the story of his fantastic beard and bring it to you, our much-loved public. Donald and his impressive black beard, were on vacation a few months back in our fair city. From Kansas, Donald told us he had road-tripped to Denver to attend a family reunion and he said his family tolerates his beard because “They know I won’t change.” We would never want you to change that beard, Donald. Not ever. Donald told us his beard originates from laziness and that it also is a mechanism to become instant friends with other dudes with beards, and we can see why. When not attending to his beard, Donald reads a lot of non-fiction and plays a lot of guitar. You can serenade us and read to us by the fire any day Donald, as long as you keep that beard growing! (In case you’re curious, Donald’s bad-ass t-shirt features this band).

Red Beard For the Win 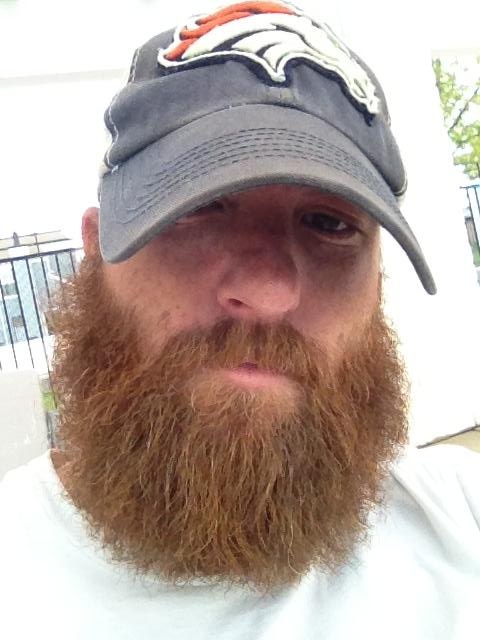 Here at Beards of Denver we can’t get enough of our Ginger Beards. When Zac reached out to us to share his amazing beard, we were thrilled. Zac has been growing his beard on the regular for about six years, ever since he met his wife Blanca. It’s only been in the past four months that Zac has let his beard grow and really “be itself”. This bold move of free-flowing Beard Growth has earned him the nickname “BeardMan” with his colleagues at Wright Tree service, where he is the head foreman for the dead beetle kill trees in the Rockies west of Boulder.
He and his Blanca moved to Denver about a year ago from Deadwood, South Dakota and can’t imagine living anywhere else, and we can’t imagine having this great beard move away! Bianca loves Zac’s beard because she feels it’s extremely unique and not just any man can grow a beard like his; we have to agree! Thanks Zac!

As fans of Beards of Denver may not be surprised to learn, Red Rocks is a mecca for spotting epic beards. But when we saw Sean Walrad tailgating before the Avett Brothers show recently, we knew we’d discovered a bearded diamond in the rough. Sean, who lives in Colorado Springs and is a tattoo artist at Nostalgia Tattoo Co. there, not only can obviously grow an impressive beard, he has used his stunning handsomeness to his advantage, trying out to be a beard model in Bend, Oregon after he had heard about European Beard Model competitions (that sounds like a trip we need to take!) Sean, who’s a huge Colorado Avalanche fan, told us he and many others specifically will grow out their beards when the Stanley Cup starts, which seems like as good a reason as any for showing off that rad facial hair. When we asked Sean’s lovely sweetheart Mandy if she was a fan of his beard, she noted she couldn’t imagine him without it, since he’s had it the entire three years of their courtship. She did say though that sometimes she grabs his beard at night instead of a blanket, which really seems like a better thing to nuzzle up in anyway! Also, apparently Sean and Mandy’s cats aren’t afraid to curl right up in all that bearded-fierce-fantasticness, either! Those cats RECOGNIZE. Thanks Sean! We now know where we can get an awesome tatt AND gaze at an amazing beard.

We met up with J. about a month ago at one of our favorite beard hunting grounds in the city: Goosetown Tavern. Not only does J. rock an amazingly impressive beard (and awesome “Keep Denver Beard” t-shirt), he is also a complete and delightful southern Mississippi gentleman to boot. And J. isn’t an alias; he was named after his dad’s best friend J.P. and has gone by J. his entire life. He originally moved to Denver a few years ago from Mississippi to attend culinary school, and now works at the multiple (and delicious) Moe’s BBQ locations, where they are very welcoming of beard culture (and Makers Mark shots, which we approve of, naturally). This is the first time J. has grown his beard this long, and he said his roommate had one and that was part of the inspiration to grow his out. While his mom isn’t his beard’s biggest fan, he does believe his dad has some Beard Envy (and we can see why!) J.’s an Eagle Scout from back in the day, and if we had any say, he’d definitely earn the badge for Bad-Ass Beard! Keep up the great beard work J.! 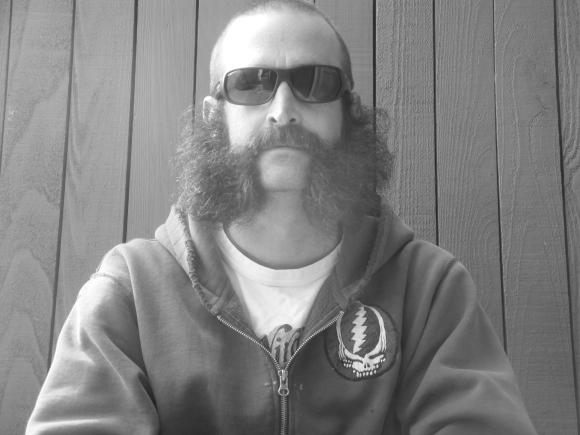 We first brought you the story of our favorite Bearded Beer Trafficker, Dan from Wynkoop, back in December. He promised us a 6-month progress report, and boy, did he deliver! Feast your eyes on these chops (photo taken in April), which according to Dan, he is still rocking. As lovers of the beard, we could not be more proud! Thanks buddy!

Occasionally, the Ladies of Beards of Denver go on a hunting expedition with a bit too much whiskey and sass (well, let’s be honest, the sass is always present). On those said occasions, we may not take the best notes…which is why this amazing beard is so mysterious, because from our (less than) detailed iPhone notes, we are not sure if he is Jesse or Seamus, but really, what does it matter because LOOK AT HIS BEARD!!! (yes, Jesse/Seamus’ beard warrants three exclamation points). We met him at the third night of Lucero performances at the Bluebird back in April, and he lives in the City Park ‘hood and has resided in Denver the past six years, before that hailing from Albany, New York. Jesse/Seamus said he’s a retired bartender and loves to hang out. With his amazing beard we imagine he has tons of takers!  Thanks darlin’!

There aren’t always nightmares on Elm Street; sometimes there are amazing beards! We met Tommy a few months back at The Elm bar on East Colfax and Elm and we were immediately amazed by his fantastic handle bar mustache and beard combination. Tommy first started growing facial hair when he was 16 back in his home state of Wisconsin because he found an ID that said he was 23, so he figured he needed a little facial-hair power to back up that ID (smart thinking!) Tommy’s been in Denver over nine years, but is still an official shareholder of the Green Bay Packers, and his nickname back in Wisconsin is Weird Beard. When asked how that name came about, he told us he used to have a huge goatee and he would always eat chicken wings, which prompted a friend to say on one occasion that he had chicken in his Weird Beard (again), and the name stuck (just like that pesky chicken). Tommy’s sweetheart Kelly loves his ‘stache/beard combo, and we can’t blame her, it is pretty fantastic! Thanks Tommy! 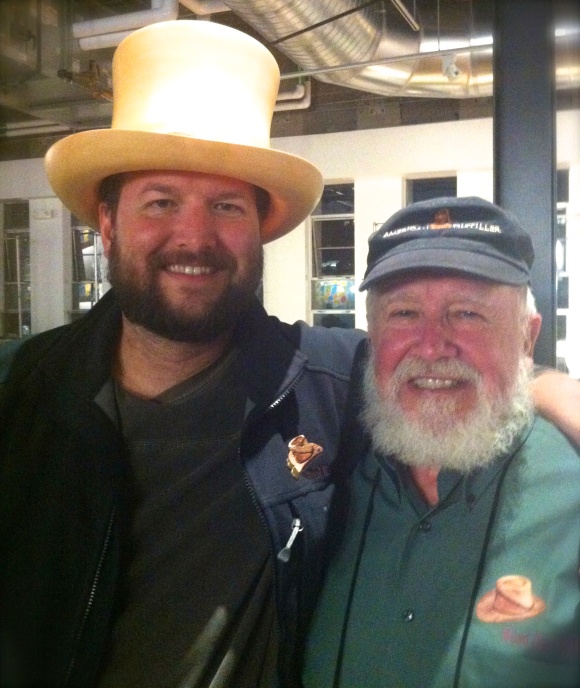 Who knew spirits and beards went so well together? The ladies of Beards of Denver, that’s who. A few months back at the D-Still spirit-tasting event in Denver (during the American Distilling Institute conference), we were lucky enough to happen upon Gary Hinegardner and his son Jeremy and their amazing father/son beards’ combo. The elder Hinegardner, who lives in Montgomery City, Missouri, with his wife, Katy, dabbles in making spirits (gin, whiskey, and vodka) and also makes the impressive wooden hats Jeremy is modeling here.
Jeremy, who has called Boulder home since 2000, runs his own company called Copious Free Time, where he helps people solve complex technology problems. Jeremy used to only have a goatee (for shame!) and after attending a conference in Ireland last year (where attendees were asked to grow out their beards; sounds like a great conference) he smartly decided to stay on the beard-path. Gary has had a beard or ‘stache most of his adult life (wise man indeed) and he  was a wood turner for a long time before he decided to learn how to make wooden hats, and now, spirits. His distillery is in New Florence, Missouri and he plans to let his beard continue to grow as he pursues his newest passion. Check out Gary’s distillery both here and here. Thanks for keeping beards in the family, guys!

When you head to an oyster fest, you go in expecting a high-level of awesomeness, and it only gets better when you also meet a fantastic beard. The ladies of Beards of Denver were lucky enough to encounter Dan while in line for said oysters at the High West Oyster Fest in Boulder a few weeks ago. From rural Kenosha, Wisconsin, Dan said his beard is stellar for many reasons, most importantly that it acts as a natural sunscreen when he snowboards. He’s been growing his beard since January, and he thinks he’s going to keep it around since it’s took a lot of work to get it to this stage. Dan and his lovely girlfriend Kat live in Boulder, and were Oyster-Fest VIPs; no messing around with good beards OR good oysters! They even shuck their own oysters at home. What we loved most about Dan (besides the oyster stain on his shirt) was the confidence he had about his beard and himself. In his words: “I’m handsome no matter what!” We think, even more so with that bountiful beard.